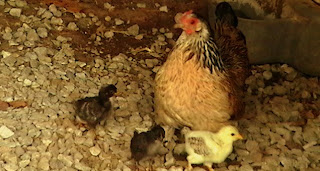 Once upon a time a beautiful young hen moved to NOL-NOC Estates. She was a lovely little Silky mix and was chosen because she was said to be a nurturer. We named this sweet chick Elenore Hen after my sister because my sister is also a loving nurturer.

Elenore Hen sat on every nest of the the other hens but she never managed to have her own clutch of eggs. Many will remember the stories of Elenore Hen actually claiming four kittens born in one of the nesting boxes. (She made Countryside Magazine with that story!)

Finally, after almost four years, Elenore Hen managed to hatch a little flock of her own. Her three chicks were names Mr. Gibson, Chicklet and Rebecca. No matter how hard Elenore tried to watch over these sweet chicks, a predator managed to pick them off one at a time. Elenore Hen immediately returned to a clutch of eggs and guarded them with her life. Again she hatched three chicks and they were identical to the first three so they were named Mr. Gibson II, Chicklet II and Rebecca II.

Rebecca II was nabbed almost immediately when Elenore took them for their first outing. Next to go, we regret to say, was Elenore hen herself. It was a very sad evening when Mr. Gibson II and Chicklet II returned to the hen house alone looking for their loving mother. 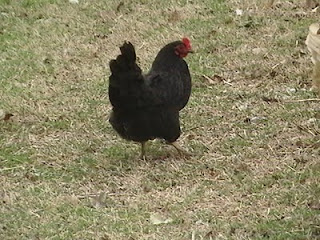 Here is Mr.Gibson II enjoying a life on the farm. She is almost identical to her mother in size and in temperament. Yesterday I noticed Mr. Gibson II was spending a great deal of time inside the hen house. Yesterday evening when I went to count the flock I was short one chicken. I was missing Mr. Gibson II. I shined the flashlight around and was happy to see her in the nest box on a little clutch of eggs. 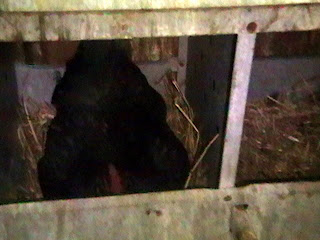 It appears that Mr. Gibson II is going to be a loving nurturer like her mother. We're hoping to keep and eye on interesting developments and will keep you posted. To avoid confusion in the future we'll try to refer to this little hen as Gibson.
Posted by Granny Annie at 6:18 PM