DOES IT MAKE A DIFFERENCE? 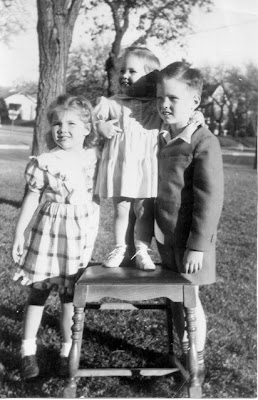 My sister, me, my brother.

Called to my daughter’s parent teacher conference in her elementary school , the teacher took out my son’s folder and began to compare her work to his. “Put that away” I told her, “We’re here to talk about my daughter”.

My sister was a bit of a rebel in college. My first year at OCU, I was called to the Dean’s office for a conference. As soon as I sat down the Dean pulled out my folder and inside the front cover in big black letters it read “Elenore’s sister!”

Forget it when my sister and I were compared to our brother. Let me just say that we have always called him Saint Jim and neither of us can hold a candle to his reputation.

My siblings and I seem connected at times by ESP. Other times I have to wonder if we were all three raised by the same parents. Setting all differences aside, we share compassion and love and that is what matters.

We also each share having married the perfect mate because none of the three of us would be worth a hoot without our practical, loving spouses who anchor us and keep us humble. Ron defines me best by saying I was running amok until he found me.

I have heard that we are more influenced in our growing up by our siblings than by our parents. Also our sibling placement plays a large role in how we turn out. Were you only, oldest, middle or youngest? Did your siblings affect you in a positive or negative way? If you were an only child, who inspired you?
Posted by Granny Annie at 5:39 AM