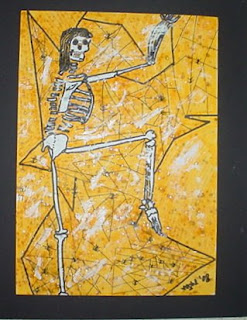 Nancy Leitz sent me her daughter's dressed Teddy Bear Hughie so I wouldn't worry about my granddaughter liking devils. 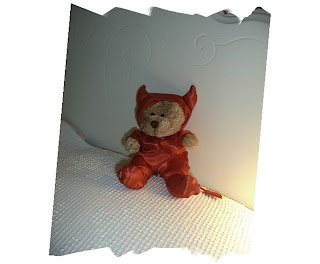 My grandniece Cloelle is ready for trick-or-treating. What would you say she is thinking? I'm guessing it's "Mom is at it again." 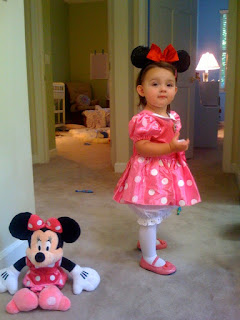 My daughter's family artwork. Carving pumpkins only became a tradition in our family when my best friend Pat exclaimed, "What, you don't carve Jack-O-Lanterns???" then she showed up at our door with three small pumpkins and showed us how to go about carving them. I never got very good at it, but my daughter has always gone above and beyond. It looks like her children get in the act also. 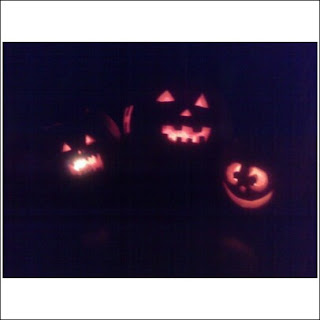 HAPPY HALLOWEEN BLOGGERS ONE AND ALL!
*The Merriam-Webster's Word of the Day for October 31 is:
chiropteran \kye-RAHP-tuh-run\ noun:
any of an order of night-flying mammals with forelimbs modified to form wings: bat
Example sentence:
The vampire hunters were greeted by swarms of chiropterans as they entered Dracula's castle.
Did you know? "Chiroptera" is the name of the order of the only mammal capable of true flight, the bat. The name is influenced by the hand-like wings of bats, which are formed from four elongated "fingers" covered by a cutaneous membrane. It is based on the Greek words for "hand," "cheir," and "wing," "pteron." "Cheir" also had a hand in the formation of the word "surgery," which is ultimately derived from the ancient word "cheirourgos," meaning "doing by hand." "Pteron" is widely used in technical names of flying insects. It's also the ancestor of a well-known, common word: "helicopter," which joins "pteron" with Greek "heliko," meaning "spiral."