This month, the prompts are being provided by messymimismeanderings. 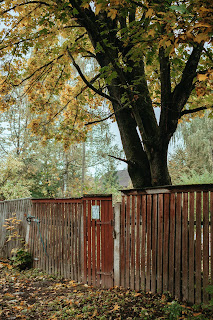 Sylvia did not mind the opening in her fence as long as nobody lived next door.  She believed if neighbors moved in they could talk at the opening in the fence.  Maybe share a cup of coffee or two. However when the Wilson's moved in things did not turn out as Sylvia had hoped.  They brought along their huge dog Killer.

Killer was kept on a leash every time one of the Wilson's went out.  That was okay.  There were occasions though when Killer would escape the house and push his gigantic head through the fence opening. Sylvia knew it was just a matter of time before Killer would get into her yard.

Sylvia was not well acquainted with the Wilson family. They had not seemed friendly when she tried to visit with them.  She decided the best form of communication would be to depend on the mail.  She sent them a letter describing her concerns and they responded by yelling at her when she was outside.  They screamed that she should repair the opening in her fence.  It was actually the Wilson's fence and was on their property line so she informed them of that in another letter rather than yelling at them.

It was time to solve this concern.  Sylvia found an old shelf board in her garage that was just the right size and she nailed it across the opening in the fence. No, it was not a pretty fix but it did the job.  Killer could not get in her yard.

Killer did not like the fence being blocked.  He had enjoyed peeking his head through.  His only alternative was to dig under.  He worked most of the night was was fully in Sylvia's back yard when she came out in the morning.