The prompts for WFW this month are provided by Charlotte (Mother Owl).  These are some good ones. 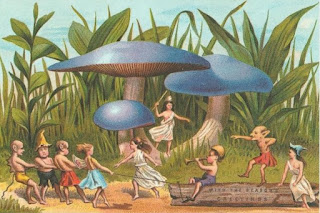 A small group of tiny rebel elves let by Copper took shelter under a large mushroom. They were in shock after thinking about their homes of centuries threatened to crumble in front of them. The clock was truly running out on their lives of freedom They had enjoyed the forest without enemies. Now Jerome was their enemy and had sold them out. He was enjoying his new circle of friends. He was toasting the fools that had influenced and lied to him about the importance of forming a government. The elf army heard the murmurs of Jerome's craziness as they sought shelter in the field.

Copper announced that it was time to dump that ashtray of corrupt, crooked elves that only worked for what would benefit them. It was time for soft sunshine to embrace everyone once again but first they had to behave like loud thunder.

Jerome, surrounded by his allies, stood on the podium demanding the elves come out of hiding and follow him. He had a lot of promises. He would see that they all benefited by his leadership. It would only require them to pay this newly formed government a huge annual salary of nuts, herbs and mint clover. This type of demand would empty the coffers of the elves and leave them in starvation.

A rumbling could be heard in the distance. Copper led her group of rebel elves around the corner of the gathering place. She was like a wild animal as she and her small army charged Jerome savoring every bite of his evil and that of his foul cohorts. Their power was gone and the elf homes and lives were saved.

THE END or is it THE BEGINNING?