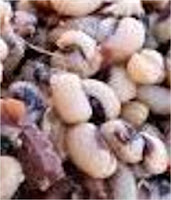 Black eyed peas and ham are mandatory in this part of the country on New Years Day. Even a teaspoon full of the peas taken like medicine with nose pinched and quickly swallowed happens often. Since no company this year, I prepared an abbreviated portion of Texas Caviar with tortilla chips to dip and had a slice of ham with it. Slim begged for the ham but I had to pinch her nose to get the caviar down her:)

Why the peas? Eating black-eyed peas on the first day of the year is believed to bring good luck in the coming year a tradition that began during the Civil War. Black-eyed peas were the only food spared by Gen. William T. Sherman and his Union troops during their destructive march through the South. Union troops found the beans to be fit only for use as animal fodder. Thus, black-eyed peas helped save surviving Confederates from starvation and were thereafter regarded as a symbol of good luck.

Why ham?  Pigs have long symbolized progress. A pig can't turn his head to look back without turning completely around, so it's believed that pigs are always looking to the future. They fit in perfectly with other New Year's celebrations.

What are your New Years traditions?