Question Of The Week 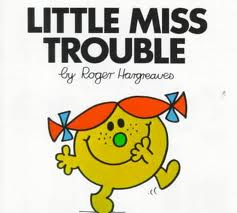 Growing up did you get into trouble?  What was the worst thing you ever did?

I am a victim of DGV (Domestic Goat Violence). One very stubborn goat and my blood thinner medications do not mix.  Tina has always taken spells of getting her head stuck in the fence but lately she has become an addict.  Let me tell you that it is not an easy job to remove a horned goat's head from the fence.  Pictured you see a small sample of the bruises that decorate my limbs due to continual rescues.  I'm beginning to wonder if it might just be easier to saw off her head! 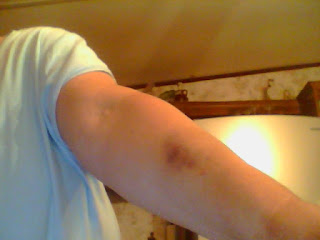 It appears that kidnapping is a hereditary trait.  In the following bad photos (so sorry about that) you can see a hen in a nest box.  That hen is sitting on eggs AND three little kittens.  Mr. Gibson the hen has taken over David's new kittens.  Mr Gibson is the daughter of Elenore Hen.  Elenore was also a kidnapper of kittens and the story about her can be found on my sidebar, as it was published in Countryside Magazine. David was one of the kittens kidnapped by Elenore.  Guess David thinks this is the way of the world because she doesn't seem to mind sharing her babies with Mr. Gibson.

One of the kittens is very inquisitive and always eager to peek out and see what the world is about.  For that reason this little one is named Nancy(after my blog friend who writes stories for the Elder Storytelling Place).  Human Nancy also shares my love of the animals on NOL-NOC Estates. As my luck goes in naming the babies around here a bit too early, I'm pretty sure we'll end up with a "Nancy Boy".

By the way, the eggs that have been placed under Mr. Gibson were given to me by the neighbor's who have the Rooster Jack Bauer.  When (and if) these hatch, we will have some more exciting news around the place as Jack's lineage carries on. 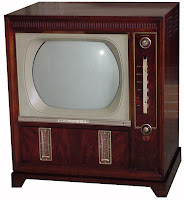 What is your favorite childhood memory?

(Mine was the day we got our first television.  It was 1957 and I was ten years old.  Walking home from school I could see the men on our roof installing the antenna.  I started running until breathlessly I entered our home, flopped in front of the TV and it feels like I've been there since:)

My sister visited with two of her grandchildren.  This is a photo of them posing in front of the family mural I made a few years ago.  I had sent small art cards to each person and asked then to return them to me for this project.  It was fun for these children to see their work from years back posted with the rest of the family including their parent's and grandparent's art work.


They did a lot on their brief visit to our home.  They got to bottle feed the baby goat, feed apple slices to the big goats, help gather eggs in the hen house and go for a ride in the bucket of Ron's tractor.  Their grandmother took that ride with them.


We received the following note from the children after they had returned to their Chicago home. 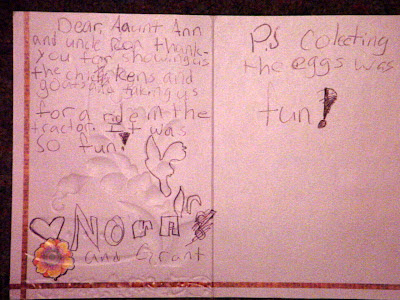 Is there a better reward than receiving such a nice note?
Posted by Granny Annie at 9:05 AM 14 comments:

WHAT WOULD YOU DO WITH THE MONEY

What if you went to church one Sunday and instead of taking up a collection the minister handed out envelopes of money to the congregation?  I read a story yesterday in the online Upper Room Daily Devotional about such an occurrence.  The minister had the ushers pass out $5, $10 and $20 bills and then instructed the church members to go out and use this money to help someone.


How would you have helped others with the money?


Link to The Upper Room Daily Devotional
Posted by Granny Annie at 4:00 AM 17 comments:

Every morning I have to guard the barn entrances.  Why?  Because every morning Mame (top photo) and June (second photo) try to sneak past me to steal the cat's food.  They literally pick two different entrances and one tries to distract me while the other sneaks past me.  These girls seem to be addicted to cat food or else they are addicted to the ritual.  Regardless they have me well trained:) 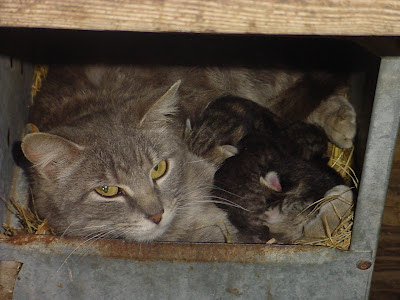 A few of you may remember that David was born in a nesting box and her mother, Miss Hissy and Elenore Hen fought for custody of the kittens.  David has had two litters since then and returns to the same nesting box where she was born.  Yesterday morning she gave birth to three (and maybe four) new kittens. The nursery nesting box is her ritual. 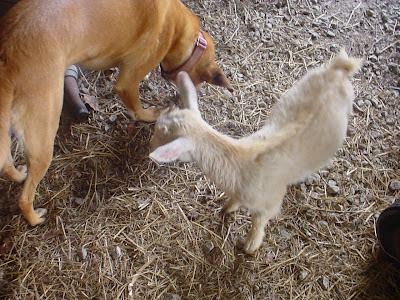 One of Slim's rituals is to adopt every rejected chicken, kitten and now goat on the place.  She has befriended Ashenhurst, the twin kid rejected by mother Polly, and they hang around together at every opportunity,  Poor Ashenhurst has had his head slammed in the door on several occasions as he attempts to trot inside the house behind Slim.  That ain't gonna happen'!
Posted by Granny Annie at 7:03 AM 28 comments:

THE AGONY AND THE ECSTASY

Our Easter Sunday was only eventful due to a trip to the ER.  Saturday afternoon the suffering began.  My throat was sore and a cough was developing.  Sleeplessness followed and by noon Sunday the throat pain was literally unbearable.  While it seemed to be strep, I was not running a fever so that was doubtful.  As crazy as it seemed, the emergency room was the only hope imaginable for me to get some immediate relief.  WRONG!


Strep was quickly ruled out.  The final diagnosis was an upper respiratory infection that could be viral or could be bacterial but either way there was nothing to do but drink lots of fluids and try taking an antibiotic to see if it would help and let it run it's course.  That was the agony part of my story.


A local store was having an after-Easter sale on their purses.  There was a red purse that I coveted and  planned to go back early Monday to buy it before anyone else did.  Of course it had never dawned on me that the Monday after Easter would find me totally incapacitated.


Yesterday I was feeling somewhat improved so Ron agreed to drive me to the store.  On the way we ran into some neighbors who were surprised to see us out and about.  Ron told them I had to go get a new purse.  The neighbor lady said, "Oh I just bought a red purse!".  As we drove away Ron mumbled something about, "Wouldn't it be funny if she bought your purse?" No, not funny.  Not funny at all!


Much to my relief (the ecstasy part of my story) we arrived at the shop and they still had my purse.  Sadly the mark down was only 15% and I had hoped for 50% but I bought it anyway.  It is amazing how quickly the healing has come to my poor sickly body since buying the purse. If we had known the healing powers, we could have saved a trip to the ER. 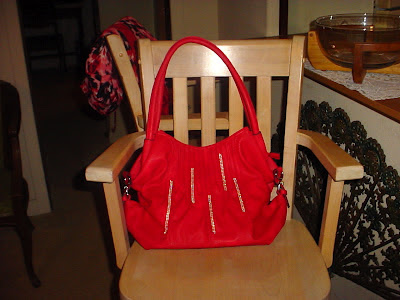 The healing purse!  (Those are little strips of rhinestones down the front.) 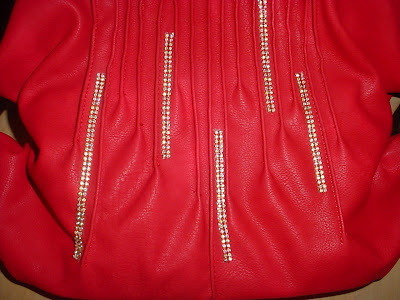 THE MICE WILL PLAY

This cat has been away for one month. A lot of you mice have been playing big time and I have enjoyed reading and catching up.

To blog or not to blog has been the question plaguing me.   Blogger lost the "email follow-up comments" for a while and that made thoughts of returning difficult.  It has always been fun and easy for me to receive the comments others are making through email.  It was very depressing to think that was over.  Moving my blog to Wordpress was a strong consideration.  However,  for now, things are back to normal at Blogger and all seems right with my world as I dive in for another 7 years.

This Monday question is:

Do you use the "email follow-up comments" ?

I try to comment back to each person on my blog and try to mention something about one of their recent posts.  It would be great to know that you are selecting the "follow-up" when you make a comment here.

If you read blogs through the google reader and do not visit homepages, I wish you would check mine today.  I have designed a new border using portraits done of me by many of the artists at the Julie Kay Portrait Party.  They based those on my new profile photo and their work really makes me smile. 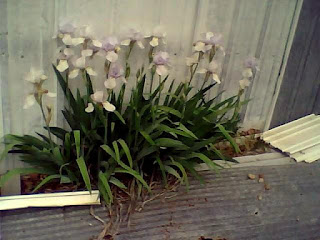 Amazing little garden that popped up next to the workshop through a pile of metal sheets.  You never know where to expect a beautiful surprise.
Posted by Granny Annie at 4:00 AM 22 comments: