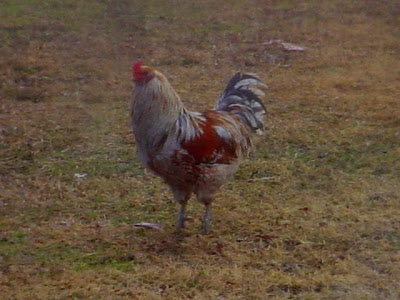 MAY I INTRODUCE YOU TO ROOSTER JACK BAUER

Yesterday was another time we needed the video camera. Our new Araucana Rooster was turned out with the rest of the flock and it was get acquainted time. He and Daryl had been speaking to each other and I noticed that Daryl would speak the usual five tones of "Cock-A-Doo-dle-Doo" while the new rooster only had the "Cock-Aaaaaaaa" and no "Doo-dle-Do". Perhaps that became a bone of contention because the next thing I knew, the two big boys were at it.

It was a serious fight and the first in attendance to watch were my chicks, Mr.Gibson II and Chicklet II. Chicklet II grabbed a rooster tail feather that had been shed in the heat of battle and began running around in circles, flying the feather like a banner. Perhaps it was her way of announcing the fight because the next thing I knew the guinea fowl all gathered in a ring around the roosters and I'm pretty sure they were exchanging bets.

I was worried but Ron assured me the roosters needed to establish a pecking order and to leave them alone. Slim wanted to jump into the fray and break it up but I held her off. Finally I told Ron that the new rooster was covered in blood. "Well break them up!" he yelled, as if he hadn't told me to let them fight. Anyway I allowed Slim in at that point and she sent the two roosters packing in different directions. The rest of the day there were no problems and today each rooster has their own little flock of hens to tend to.

Then it dawned on me -- the new rooster wasn't crowing, he was saying "Damn it!" thus his name is now Jack Bauer. That is appropriate since Season 8 of 24 starts tomorrow night. How was that for a segue into an ad for the show? LOL
Posted by Granny Annie at 8:48 AM