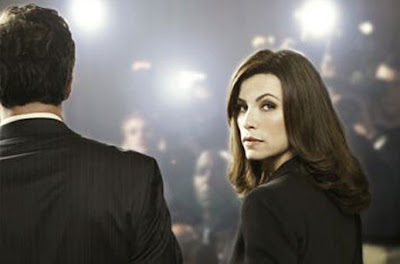 The commercials for the Fall television line up is always enticing. I am happy to be able to watch the ones I miss by going to Hulu.com.

FLASH FORWARD -- Two thumbs down (They go home at the end of the day as if nothing happened. The entire world passed out for 2 min. 17 seconds and catastrophes occur everywhere yet the FBI workers all had their homes when the clocked out for the day. duh!)

MODERN FAMILY-- One thumb up for good comedy. This is promising another thumb.

THE GOOD WIFE -- Two thumbs up. Perhaps just a chick flick but I really liked it.

TRAUMA -- Enjoyed the first episode but am reserving judgement.

THE JAY LENO SHOW -- It did get off to a shaky start, but he is on a roll now. Something great is going to have to show up opposite at 9:00 to get me to skip Leno. (The Good Wife might be the one.)

We always watch NCIS and it is going well with the new season, but we're not too sure about the new NCIS LOS ANGELES. Ron didn't like them saying they were going up to Pendelton from Los Angeles. He does tend to sweat the small stuff.

TWO AND A HALF MEN is going to have to lose the dummy (the ventriloquist dummy) if I'm going to keep watching it. Now that Jake is so grown up and not in as many episodes, it's getting dull.

Meanwhile I found a great little HBO series called THE NO. 1 LADIES DETECTIVE AGENCY and am renting it on Netflix. Talk about an unexpected detective show.

Have you uncovered any diamonds in the new TV shows or do you have some movies to recommend?

Be sure and click on Jamie Dawn's photo on my sidebar for a rousing political comentary.
Posted by Granny Annie at 6:58 AM