Remembering this story from February, 2012 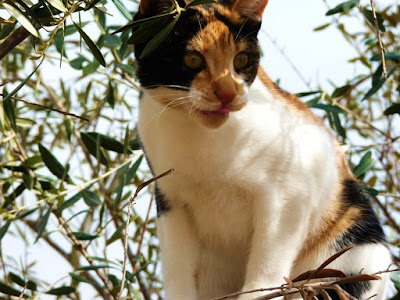 My sister called shortly before dark Monday evening to share their unfolding adventure.  It seems an unfamiliar cat was trapped in a tree in their backyard.  It was frightened and crying.  My brother-in-law had made several attempts to rescue the feline at the exclusion of climbing up himself to retrieve it.  He has a heart condition and this would not have been a wise move.


Sis told me her spouse was on his way to the fire department to see if they would or could help  They could not and would not.  So much for the stories of firemen rescuing stranded cats.  All they could do was suggest placing an open can of cat food at the base of the tree to entice the cat down.


There was a lot of unrest in their household watching the cat and keeping an eye on their dog each time he went out so he wouldn't eat the cat food. Plus they imagined the food would attract all kinds of critters into their yard during the night.  The next morning the stranded cat was still huddled in the tree with untouched cat food on the ground.

After searching google for possible answers to the dilemma they decided on calling a tree trimmer.  The man came out and using his proper equipment for tree climbing, rescued the cat.  The tree man gently placed the saved cat on the ground.  The beautiful calico sniffed the food then turned haughtily and walked away to what we assume was the direction of her home.  My sister who had planned on having this rescued cat in her life forever since it would feel such a sense of gratitude, was offended as, after all their trouble and expense, the cat just walked away.  "Bitch" my sister muttered.

Thus arrived the question of what do you call a female cat.  Everyone knows a female dog is a bitch and a male cat is a Tom.  Does everyone know that a female cat is either called a Queen or a Molly?  This one was undoubtedly a Queen.  She did not bother to run away, she simply departed at her own pace very regally without so much as a "by your leave".