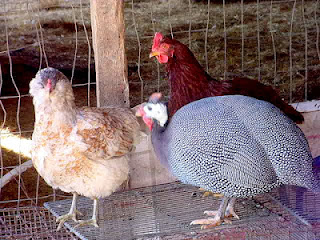 The light colored chicken in the above picture is Chicken Little.  She was our oldest hen and our only Araucauna.  She moved here with us from Kansas six years ago and was the only surviving chicken from that original flock.  A couple of weeks ago she quit coming inside with the other hens at night.  I would see her out in the day time but she obviously had a nest hidden somewhere and was tending to her eggs.  We searched and searched for the secret nest so we could move her eggs inside the pen and get her inside as well.  Finally I quit seeing Chicken Little out in the day and decided the chicks had hatched or were hatching.  It was exciting to await her reappearance with a little troop of chicks trailing behind her.  Then I found the eggs.  They were cold and abandoned and there has been no sign of Chicken Little.

(I originally posted thus with number 6 in the marathon and then I thought "duh" split the post and add another toward the goal.  It takes me a while sometimes.)
Posted by Granny Annie at 5:55 AM