THESE ARE LOOK-ALIKE ROOSTERS OF LEGS (TOP) AND ELVIS AND ELIZABETH (BOTTOM). 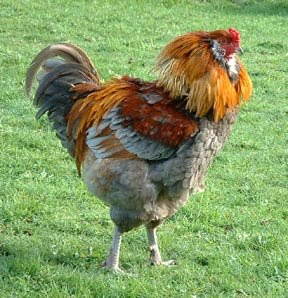 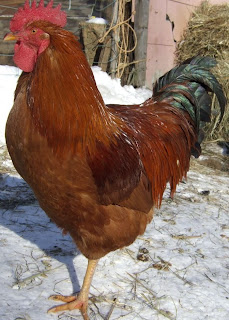 Elizabeth had a twin rooster. Hatched at almost the same time, Elizabeth and Elvis were idential big red roosters except for a fancy fluff at the base of Elvis' tail feathers.

Many of you know that we currently have a surplus of roosters, even with the recent demise of Elizabeth. We credited his death to a passing dog or coyote. I think we were wrong.

Our big roosters of the six were Elizabeth, Elvis and Legs. The largest of our surplus roosters is Legs. He is a strong and hearty, Ameraucana mix rooster. He is a good looking fellow and has been nice until recently. I saw Legs go after Elvis a few days ago and the brief fight sounded like the clash of the Titans. Since that day Elvis had changed his roosting spot from the hen house to the stall next door, an obvious indicator that Legs won the fight.

Perhaps the death of Elizabeth was murder by Legs. Perhaps Elvis is next as Legs does what roosters do to take his place as the King of Rooster Hill.
Posted by Granny Annie at 8:08 AM